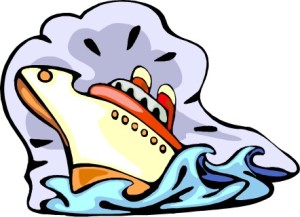 Some years ago, while living in Spain, my husband and I decided to take a Mediterranean cruise. Training to Venice, we boarded a cruise ship that carried us to numerous ports of call as far east as Turkey, before heading west. The journey, though fun and exciting, contained one adventure that we would have preferred not to have experienced.

Following more than a week of beautiful weather and fairly balmy seas, we awoke early on the next-to-last morning of the cruise to the ship’s jostling. Having departed Monaco/Monte Carlo the previous evening, we were scheduled for a day at sea before docking in Barcelona at the journey’s end.

Sometime during the day, the cruise itinerary promised a sail-by of the Spanish islands of Mallorca. Since my husband and I had previously visited Mallorca, the sail-by held little interest for us. Later we would learn that many others on-board felt the same way. Nonetheless, the event was built up to be something special, something to which we could all look forward to seeing. Mostly, though, we were simply looking forward to a relaxing day at sea before returning home.

But the blue, cloudless skies to which we awoke that morning belied the condition of the sea upon which we were sailing. Throughout the morning, the ship’s jostling continued to increase, turning into a serious rolling motion.

In sailing to the west, the ship had encountered a hefty and steady wind that was blowing down from the north across the European continent. As the wind blew across the sea’s surface, it transferred some of its energy to the water molecules, setting them in motion. Similar to the manner in which one pushes a child on a swing, the regularity of the wind, continuously blowing across the waves that it generated, caused the waves to grow larger in the wind’s relentlessness.

As the day progressed, the wind and the waves became more than a nuisance. They became a threat.

Because the wind was south-blowing, the waves were parallel to the ship’s westward movement, striking the ship broadside. Each time that a wave struck the starboard (right) side of the ship, the ship was lifted by the swell, causing it to list to the left. Making matters worse, the listing was magnified by the wind pushing against the ship’s starboard side.

Then on the downward side of each wave, the ship would begin to lean back to the right, negating the wind blowing against the ship, to provide a moment of uprightness before the process would begin again. With each new wave, the ship and all on-board were lifted up, rolled left, dropped back down and then returned to an upright position. With no end in sight on the horizon, the waves kept coming, increasing in size and amplifying the ship’s movement, as the wind continued fueling the waves.

Inside the ship, the sight was not pretty. People were rolling out of bunks. Tables and chairs that were not anchored down were sliding across the decks. People, unable to walk, were holding on to whatever was available. Not wanting to lose anyone overboard, the captain ordered everyone to remain inside and then suggested that everyone remain in their cabins.

But by early afternoon, those on board felt not much safer inside than out. No one (NO ONE) wants to go down with a ship, unable to escape a personal Poseidon Adventure, a “high life” turned death trap.

By this time, the ship was rolling so far to the left that people were becoming terrified, even screaming. Crew members, having worked at sea for as many as twenty years, were confessing with panicked looks on their faces that they had never before experienced anything like this event.

All the while, the Captain was making occasional announcements over the intercom, attempting to relieve the fear that had become an unwelcome passenger on-board. In an attempt to maintain the integrity of the intended course (so I suppose to be his reasoning), the captain tried to encourage us with his stated hopefulness that the seas would soon calm down and that we would still complete the sail-by of Mallorca. In response, people began yelling back at the intercom, “Forget the sail-by! Get us out of here!”

Yet the Captain seemed determined to remain on course, refusing to be swayed from the trip’s scheduled route, even though the wind and waves threatened to, if not end the journey altogether, at least make it miserable.

Miserable and scared we were. Holding on to something near an exterior door in a lobby area, I remember being grateful that our sons were not with us. If my husband and I went down with the ship, at least they would live. The event was truly that harrowing, literally descending upon us out of a clear blue sky.

Finally, though, when it seemed that neither the ship nor the people on-board could withstand much more of the violence, the Captain announced his concession. Foregoing the sail-by, he commanded the ship to be turned into the wind.

As soon as the ship turned, instantaneous relief and smooth sailing were ours! It was as if we had been transported through a barrier separating two distinct worlds:  one of violence and chaos and the other one of peace and order. By facing the wind, the ship was able to cut through the wind and waves, taking the impact out of their punch and ending their threat to the safety of everyone on-board.

The ship erupted in celebration of the action that had returned the ship to a position of stability, evaporating the fear that had permeated the atmosphere. While the crew straightened out the furniture and other items that had been tossed about, the passengers returned to the decks and their regular activities with gratitude and great relief. Belief and expectation that the journey could and would be safely completed replaced the fear that had finally departed.

All that had been required to get the ship out from under the duress of the threat that day was a decision to use the power that was at the ship’s disposal: to issue a command to turn the ship to face the wind and waves head-on. Doing so nullified the threat of the wind and waves in that time and place, allowing everyone on-board to relax in the freedom that safety provides.

Recorded in Luke 8 is an account of an incident with wind and waves upon the Sea of Galilee that is similar in nature to the event that we experienced aboard the cruise ship. While Jesus slept peacefully in the bow of a much smaller boat, a squall descended upon the lake, causing the disciples who were with Jesus to fear for their lives. The Greek word that is used to describe this storm is one that implies intensity and ferocity of wind, such as a whirlwind or hurricane, but with great and thunderous storm clouds. This storm was violent, producing dangerous waves that threatened to topple the boat at any moment.

As Jesus slept, the disciples watched the storm’s intensity increase. The wind’s fierceness brewed discord not only in the water, but in the boat as well, in the hearts and minds of the disciples. The wind, that itself could not be seen, was the cause of the peril confronting the men, taking over control of both their boat and their thoughts.

The wind was the disciples’ foe, just as it had been ours aboard the cruise ship. And just as deliverance from the threat had come to us by facing the wind, so too would the disciples’ deliverance come to them in a similar manner. Empowered by the captain’s order, our ship had turned to position us rightly against the wind, and the disciples would need a power capable of changing their course, too. The power that they needed would come from Jesus, from His command.

Assured by His position of righteousness with His Father, Jesus could not be toppled by any ill wind blowing against Him. Fear could not befall Him, for death could not threaten Him. Death at sea could not have held Jesus any more than His later death upon the Cross was capable of doing. Jesus’ right standing with God, forever intertwined with His Father’s love and promises, empowered Him to stand firm against every threat, unencumbered by the weakness that doubt and fear produce.

His righteousness (right standing with God) provided Jesus with authority (the right) from His Father to speak in opposition to everything that defied His Father’s will for both Him and His Father’s world. Jesus’ spoken words against the wind and all that wrongly bore down upon the world were powerful because they were aligned with God’s will that is revealed in God’s Word. Jesus could not be intimidated by anything or anyone because He knew and accepted His position of authority as the righteous Son of God. Nothing could sway Him from the truth of either His Father’s identity or His own.

When Jesus stood up in the boat, faced the threat and voiced His Father’s will, the threat died out. It had no choice. It lost its punch.

The day would come, following Jesus’ resurrection, when the disciples would accept and use the authority that would be theirs in Christ Jesus, empowered by the assurance of His righteousness that gave them His eternal life. Speaking God’s will with the same right by which Jesus had spoken it—–as sons of God in Christ Jesus, their words were backed by the same power of God (Holy Spirit) that empowered Jesus’ words.

Today’s disciples carry the same authority backed by the same power that the early disciples had, providing us with the same opportunity to speak God’s will according to His Word. We are enabled to confront the things that generate chaos in this world head-on without fear, becoming instruments of restoration through the implementation of God’s Word, as it is spoken by us.

If we, as disciples of Jesus Christ and sons (despite our gender) of the living God, should ever doubt the veracity of our God-given ability to speak God’s Word with authority, an ill blowing wind is coming from somewhere to cause some degree of chaos in our thinking. God is not the one keeping us from using our God-given right to restore order where it is needed. To the contrary, God is the One who has empowered us with Himself to do so.

All that is needed to defeat the opposition of doubt and fear in our minds and hearts is to change direction by speaking the words that align us with God. All opposition to God is defeated by the power of Truth that His Word contains.

And we are just the men and women to deliver the full Gospel Truth in the midst of every circumstance, wherever we go.

With every Word of God that we speak, lives—–ours and others–—change course.