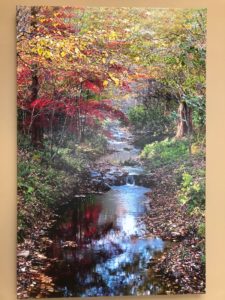 In 2013, a Big Canoe photographer was led (without his general awareness of what exactly was being initiated) to go out to a particular place in the woods at a particular time, such that he had an opportunity to take a particular photo at just the “right” moment. Then in returning to the same place two hours later, as well as two days later, he found that the opportunity that he wanted to take that photo again was not going to be possible.

The photographer kept the photograph that he took that day on file until the time came in October 2014 when he was led to print it on canvas and hang it in his studio.

In the meantime, months prior to that day, on June 18, 2014, Sue Ceravolo, Cathy Butler and I gathered together at my house for an afternoon of discussion regarding what God was talking to each of us about at that time. Cathy saw my home for the first time that day.

The next night, June 19, Cathy had a dream in which she saw a particular painting hanging in my dining room, and on the bottom right corner of the painting was my name, as though I had painted it. So real was the dream that the next day, she didn’t know if such a picture existed or not.

The following week, I asked Cathy for a ride home after Bible study one day. Cathy used that opportunity to ask if she could come into my home for a moment, just long enough to see if I had a particular painting hanging on one of the walls in our house or not.

When Cathy B. discovered that no such painting was in my house, she told me about her dream and the painting that was in it. Describing the painting in detail, she said that it had brightly colored trees with a bright path through the center, (which is what she thought it was when she had seen it in her dream) and that it had seemed so real that she felt the need to look for herself.

Previous to all this and unbeknownst to anyone else but my husband, I had begun to search on the web in November/December for a new piece of artwork to replace an old one that I had hanging on a large wall in our living room.  The piece that I envisioned I called a “Tree of Life,” but I couldn’t find what I wanted anywhere on the internet, and I gave up my search as Christmas approached.

Then, in January 2015, Cathy was searching for a particular photo of her deceased husband, David, that she wanted to share with her grief class, when she came across a different photo of David and her grandson that she decided to have printed on canvas. She followed up by contacting a photographer, who we would learn later was the individual who had taken the earlier mentioned photograph in the woods.

When Cathy went to the photographer’s studio on Monday (January 26, 2015) to pick up her finished canvas, she was shocked when she discovered the painting that she had seen in her dream hanging over the mantle of the studio’s fireplace. The “painting” turned out to be a large, photo color print on canvas.

As excited as Cathy B. was by the discovery, she knew that she didn’t have any wall room left in her home on which she could hang a picture that large. But she then discovered a card rack that contained a card with the same photo, and the photographer, after hearing her story, offered the card to her.

Taking the card with her, Cathy B. hurried over to my house to tell me in person and so I could see the photo for myself that she had described so vividly to me.

As soon as Cathy left, I went to the computer to track down the photographer, who had taken the photo. Thirty minutes later, my husband and I were standing in the photographer’s studio, looking at the photo and purchasing it immediately to hang in our home.

Two days later (January 28, 2015), Cathy and Sue rode together to Bible study for the first time and decided to bring me lunch afterward. The three of us were back in my home together for the first time ever since the previous summer. It gave us the chance, to our utter amazement, to piece the entire story together to the best of our knowledge.

A few days after my husband and ai had placed our order, the perfect picture for which I had futilely searched was hanging on my living room wall, fulfilling the desire God had given me for a special “Tree of Life” picture. But before I even knew that the desire was in me, God was already laying out the path for me to acquire it. Now when I look at the photo, I see the three Persons of the Trinity:

1.  God the Father-Creator in the abundant variety of the trees and colors;
2.  the Holy Spirit in the stream of living water that runs vertically through the center (this is what Cathy had thought in her dream was a path); and
3.  Jesus Chris, who is the Light of the World, in the sun’s reflection as a ball of light right in the center of the stream that runs through it.

Now to top it all off, we have one more surprise to share with you. It turns out, as we learned in one of our several talks with the photographer, that the photo was taken at the creek that runs through the property of Big Canoe Chapel—the Chapel where Cathy B., Sue, and I all go each week to worship together the One who is our LORD God, Savior and Father forever.

In conclusion, we want all to know the degree of friendship and camaraderie that God has created in us for one another, as well as with Him, through this event. And after we’ve had sufficient time to think the entire matter over, we have all come to the same conclusion:   “It’s ALL you, God. You did it ALL for our welfare and ALL for Your glory.”