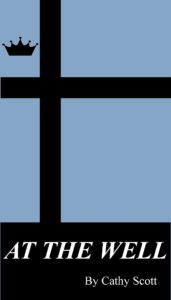 Due to the inherent sin that had passed down from Adam, the-woman-at-the-well was born cut off (separated) from God. Her isolation from a righteous and holy God is one that is suffered by us all. It is the greatest of all rejections experienced in this world, and it is of mankind’s own creation. But additionally, further isolation results from judgments that are made against one another, breaking relationships that could have otherwise proven to be supportive in nature.

On hearing this, Jesus said to them, “It is not the healthy who need a doctor, but the sick. I have not come to call the righteous, but sinners.”

Sin and sickness work in tandem, back and forth, one after the other. They erect barriers that restrict people from living the life that God has designed for us to be living with Him.

In Mark 2:17b above, the Greek word that is translated as sinners is hamartolos, defined by HELPS as “loss from falling short of what God approves.” It involves forfeiture due to “missing the mark”—being less than perfect, not whole, not well; being sinful people who can’t help but sin again and again.

The shame of public judgment upon the-woman-at-the-well may have been so great that it may have been the cause of her going to the well alone in the hot noonday sun, rather than going in the morning’s coolness with the other women. By purposefully avoiding the other women of her village, the-woman-at-the-well only constrained her activities all the more, increasing the judgment with which she convicted herself. The overall culprit behind the degradation was sin—wrong actions based on wrong thinking, and the overall outcome was sickness—a broken (less than complete) state of existence. The entire situation fell short of the wholeness of which God approves. Everyone involved “missed the mark.” No one was well, for they each had some form of sick thinking.

In Jesus’ parallel statements in Mark 2:17 regarding His call to the sick and sinners, sick is translated from kakos. HELPS defines the word as “…sore-misery related to experiencing grievous harm (affliction).” Strong’s definition of the word is “badly (physically or morally) —amiss, diseased, evil, grievously, miserably, sick, sore.”

However, in James 5:15 below, the word sick is not a translation of kakos, but of the Greek word kamno. This word is one that emphasizes the tiredness that is associated with not being well.

And the prayer offered in faith will make the sick person well; the Lord will raise them up. If they have sinned, they will be forgiven.

Kamno is defined by HELPS as “…weary to the point of sickness, ‘spent,’ ready to collapse (especially from over-work).” Strong’s short definition is “I am weary, ill.” Considered together, kakos and kamno provide a more complete picture of the overall broken condition of mankind that is generally known as sickness.

Brokenness of any kind, regardless of its cause, requires one to expend energy in excess of the amount that would normally be needed to accomplish a task, if it were done in a state of wellness. Brokenness is draining. It depletes reserves and leads to energy shortages, creating ongoing tiredness of one’s soul and/or body.

Weariness, affliction, sickness, misery all indicate weakness:  a lack of strength that is incapacitating, incapable of completely overcoming physical and/or spiritual harm. This is one of the reasons for Jesus’ Presence, why He presented Himself to the-woman-at-the-well, to the leper, to the paralytic, and to an untold number of others. It is one of the reasons why Jesus continues presenting Himself to us today.

Only Jesus is strong enough to always stand in perfect faith of God against every adversary or adversity that weakens people. Unlike the people to whom Jesus ministers, Jesus alone is whole. Unbroken in any manner, Jesus has no weak spots, no vulnerabilities. He can’t fall because He can’t fail to stand. Jesus’ perfection is God’s perfect solution for the overcoming of all our weaknesses. Jesus alone is capable of restoring wellness to all Creation. The need for Jesus is more than profound; it is universal. While mankind’s need for Jesus may be interpreted at first glance as being a weakness in the human condition, in the end, it is only in our having been filled with the fullness of Christ Jesus Himself, that we are made strong in Him. Not only does Jesus make us well (strong, healthy), He also keeps us well in His strength forever.

Matthew 12:13 (below) is the first time that the two Greek words hugies (two-part wellness of body and doctrine) and apokathistemi (restoration) appear in the same New Testament verse. Here, the translation of hugies is the English word sound, which has the same meaning here as wholeness.

Then he said to the man, “Stretch out your hand.” So he stretched it out and it was completely restored, just as sound as the other.

In providing the man with a full restoration of his withered hand in a synagogue on a Sabbath day, Jesus also restored right-thinking about both the Sabbath’s true nature and the right worship of God. God made witnesses of all who were present to see and hear for themselves the interaction of Jesus with men who were in dire need of His Presence. The strength in Jesus that enables Him to always righteously stand for Truth is a manifestation of His eternally right relationship—His Oneness—with God, His Father.

Oneness with God is perfect wholeness. It is what Jesus freely drew upon from the perfection of His own personal relationship with God His Father, to give the man with a withered hand and others whatever it was that they were each in need of receiving from Him. Each restorative work that Jesus accomplished in His Father’s name further glorified God by Jesus’ willingness to do His Father’s goodwill to His own glorious perfection. The measure of life that is restored by Jesus is always to the full measure of God’s good grace in Him. Every act of Jesus during His ministry time on the Earth was connected to words that serve God in delivering the world from the power, penalty, and presence of evil and into the power, privilege, and presence of God’s merciful goodness. Jesus’ ministry on Earth is God’s example to mankind of the restorative power of Holy Spirit enabling that is received from God in Oneness with Him.

Though the Holy Spirit Himself comes suddenly, providing complete enabling, the transition in our thinking that puts that enabling to work through faith is more often than not progressive, not instantaneous. Lingering doubts or disbeliefs regarding the fullness of God’s promises that are at work in us can prevent us from walking in greater fullness of God’s blessings. They can also keep us from distributing those blessings more fully right here and now, as God’s will would have us all to do regularly.

In John 5, an account is given of Jesus having made well a man who had been suffering as an invalid for thirty-eight long years. Jesus found the man lying alongside the pool of Bethesda in Jerusalem, where the man had hoped to receive one of the rare miraculous healings for which the pool was known. As Jesus first approached the man, He asked a question that had two potential meanings, for it contained the word hugies. Jesus asked the invalid, “Do you want to get well?” (vs. 6)

Jesus’ question went straight to the heart of the matter at hand, addressing both the man’s physical and spiritual needs. Even though the pool had become the man’s home away from home, such as it was, the man most surely wanted to get well physically, to be enabled to get up and go at will, to be made strong. But the question that may have sounded unnecessary on the surface also penetrated deeper to address the man’s soul. Was the man open to receiving the Truth of God’s grace that Jesus was about to extend to him in personally meeting the man’s dire physical need? Did the man want to get on with his life, living the way that God wanted him to be living it? Was he willing to leave his small self-centered world behind in exchange for an everlastingly greater one that Jesus’ Presence on Earth would offer to him, his nation and the world?

Jesus’ “world” (way of life) is one of self-sacrifice that restores all that self-centeredness destroys. Nailed to the Cross, Jesus would take sin with its destructiveness from mankind and place it on Himself. He would deliver every soul who would personally accept Him as Savior from sin’s due penalty forever. His suffering would be mankind’s salvation—rescue, deliverance, healing, restoration, prosperity—that would remove sin’s presence from their futures and its power over them in the present. Then, as Jesus would walk out of the Tomb, His eternal life would deliver them into a new life of complete restoration that would far surpass even the good one that mankind originally had with God in the Garden of Eden.

The message of Jesus is one of overwhelming acceptance:  Every individual life is so immeasurably valuable to God that He willingly gives His all for the total well-being of each and every one.

Acceptance is the message that the-woman-at-the-well received when Jesus’ Presence coincided in both time and place with her own at the well. In His Presence, His words changed her outlook about her future, increasing her sense of worth and giving her hope for a better life ahead. Made apparent to the-woman-at-the-well in her conversation with Jesus was the startling realization that an all-knowing God had always had His eye on her, for the Savior whom He had sent knew exactly who she was and what she needed. But even more astounding must have been the realization that the Messiah (of all people!) was willing to give to her (of all people!) living water that she could not even fathom, and all that He required of her was that she would ask Him to freely give it to her! What better revelation could she or anyone else have ever received in their first encounter with Jesus than that?