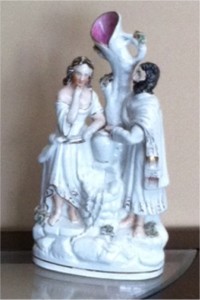 Our neighbor of more than ten years moved away from our community to be closer to her family. Her husband had passed away the year before, and though she wanted to stay put, God put everything in place for her to go. As she was departing, she stopped by to give me a special memento of our time together as neighbors. The gift was one of her figurines, one that depicts Jesus and the Samaritan woman meeting at the well. My neighbor had no earthly way of knowing the story’s significance to me. But in knowing the One who does, she knew enough to follow His prompting to give me the gift that, on multiple levels, was an honor to receive.

When Jesus met the-woman-at-the-well in Samaria (See John 4), she was a broken person. But then, so too was every other person in Jesus’ life, whether they knew so or not. So too have we all been broken, to one degree or another by many of the downturns that occur in this world. But then into our broken lives comes Jesus, and suddenly, like the-woman-at-the-well, we find ourselves in the Presence of the One who transforms lives to the glory of God and for mankind’s well-being. In His Presence we receive new insight, new perspective, new understanding and new identity that redefine who we are, giving new purpose and direction to our lives. Newfound hope promises a better future. Freed from carrying the weight of past burdens, we move forward, overcoming current hindrances. Each and every step along the way, life is regenerated (rekindled, refreshed). Life begins anew, each and every present moment that we are with Jesus.

The benefits of simply conversing with Jesus were quickly realized by the-woman-at-the-well, who learned that in hearing and accepting what Jesus has to say, the incredible occurs. Brokenness is undone by the grace of God that is in Jesus, bringing an end to debilitations in a process of renewal that is known as restoration.

Restoration is a returning to wholeness:  a state of being that meets or exceeds the original condition that existed before brokenness occurred. The New Testament Greek equivalency is apokathistemi. The compound word’s two root words are apistía, meaning “separated from,” and kathístēmi, meaning “have a definite standing.” Together their meaning becomes “restore back to original standing… to enjoy again, i.e. what was taken away by a destructive or life-dominating power.” The emphasis is on a separation occurring “from a former, negative influence to enjoy what is forward (the restoration).”[1]

Restoration involves a renewing, a new beginning that replaces a lesser state of being in a process of building up to perfection. When David cried out to God in Psalm 51:10, “Create in me a clean heart, O God, and renew a steadfast spirit within me,” he was asking God for an opportunity to begin again. He was asking for a way to put his sinful existence behind him in order to continue living with God in the present and the future. In fact, David wanted the errors of his way completely blotted out, expunged, washed away for good. He realized that not even a single sin could be left standing between him and God. He needed a fresh start.

The awareness that David had of his guilt in having broken his relationship with God is apparent in the first nine verses of Psalm 51. But right from the beginning, in verse one, as well as again in verse ten, David made his plea to Elohim, the Hebrew word for God/Gods in Genesis 1:1 from whom came all Creation. David knew that only the God who had created could re-create, restoring life as it once had been, if not better. David knew that only God could give him another chance to live as God intended. Acknowledging his deep need for a personal relationship with God, David confessed his fear of losing that relationship permanently as he cried out in verse eleven, “Do not cast me from your presence or take your Holy Spirit from me.”

Though David feared the worst, he still hoped for the best for one reason:  he personally knew both the compassionate mercy and the immeasurable power of God’s goodness. David hoped that God not only could but would, do for him that which he could not:  make right all that was wrong between them. In verse twelve, David pleads, “Restore to me the joy of your salvation and grant to me a willing spirit, to sustain me.”

The plea was twofold. First, David needed to be saved in the present from his past. Secondly, he needed a way to continue moving forward with God, such that God would always be in his future.

In effect, David’s plea was no less than prophecy, for his need confessed the provision that God would deliver to all mankind in Jesus Christ, God’s Son. Through God’s finished work of the Cross and the Empty Tomb, forgiveness of sin and Holy Spirit Presence would both be available to all who would personally accept Jesus as Lord and Savior. Jesus would safely deliver every person receiving salvation in Him from sin and into God’s Presence, meeting each one’s deepest need for re-creation and sustainment, accomplishing an all-around restorative do-over of immeasurable value.

Restoration is God’s creative power continually producing new life from the fullness of God that Jesus embodies. But within that restoration process, God has placed a switch, so to speak, that must be decisively flipped, in order to complete the personal connection with God that Jesus makes possible. The flipping is accomplished by individuals accepting and acknowledging two core truths:  (1) Jesus is the Christ—the One sent by God to return the whole world to right standing with Him, and (2) Jesus has come to restore each individual to a personal relationship with Him. The Presence of Jesus affirms two facts:  God knows our brokenness, and God wants us well.